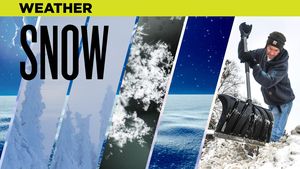 <p><p>Snow is expected to coat mountain passes near Spokane and perhaps appear at lower elevations Tuesday morning, according to the National Weather Service in Spokane. </p></p><p><p>“I don’t think we’ll see a lot of accumulation of snow in Spokane … the colder mountain valleys have a chance of getting a couple of inches at least,” said Steven Van Horn, meteorologist with the weather service.</p></p><p><p>A cold front was forecast to sweep through the Spokane area on Monday night, with snow expected early Tuesday morning, Van Horn said. Spokane is not likely to see more than an inch of snow, he said.</p></p><p><p>As the temperature reaches the mid-40s, Van Horn said, any snow that fell in Spokane will likely melt by the late afternoon. The Palouse, northern valleys and Idaho Panhandle were expected to see a rain/snow mix by the afternoon, he said.</p></p><p><p>Van Horn said forecasters also expected winds to pick up, reaching 30 to 40 mph in the afternoon.</p></p><p><p>Van Horn said people driving over passes should expect wintry driving conditions, especially if going over the Snoqualmie or Stevens passes. Northern Washington, or “the closer you get to the Canadian border,” Van Horn said, will experience the most ice and snow on the roads.</p></p><p><p>Less than an inch of snow is expected to fall in the Spokane, Bonners Ferry, Loon Lake and Pullman areas. The Sherman Pass area will see about 2 to 3 inches, according the National Weather Service map. On the West Side, Washington and Snoqualmie passes were predicted to get 4 to 6 inches on Tuesday.</p></p><p><p>By Tuesday afternoon, areas like Spokane and the Columbia Basin will see rainy weather, Van Horn said.</p></p><p><p>The rest of the week will bring milder conditions, Van Horn said. Wednesday may see light breezes, but Thursday into the weekend should see temperatures in the 50s with a small chance of wind.</p></p><p><p>“It might be a little early in the season for snow to stick around,” Van Horn said.</p></p><p><p>Though this November is on track to be slightly milder than average, Van Horn said “this has been a pretty typical fall season.”</p></p>

← 'A step in and a step up': New program aims to bring nontraditional candidates into trades through training, certifications
University High School student accused of threatening to kill another student →