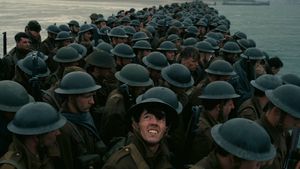 <p><p>To honor Veterans Day on Thursday, it is appropriate to look at some of the best depictions of war in cinema. The moments that bring humanity and heart to something as bleak and tragic as war. These are just 10 of the best war movies of all time.</p></p><p><h3>‘All Quiet on the Western Front’ (1930)</h3></p><p><p>One of the first films to depict the grim malevolence of war, Lewis Milestone’s anti-war picture still holds up nearly 100 years later. The film recounts many moments throughout World War I from the perspective of a German soldier, from his enthusiasm to “save the Fatherland” to the cold reception he receives upon returning home. The film never glorifies war, only showing it for the ugliness that it truly is.</p></p><p><h3>‘The Best Years of Our Lives’ (1946)</h3></p><p><p>Released after the conclusion of World War II, William Wyler’s personal tale depicts the hardships of returning from war to a world that has changed so much. The film follows three men returning home after the war, each dealing with their own personal demons such as PTSD or losing both hands. It is a sobering tale that shows these battles continue long after the last shot is fired.</p></p><p><h3>‘Mister Roberts’ (1955)</h3></p><p><p>While John Ford’s lighthearted comedy may not always take itself seriously, that doesn’t mean it has any less emotion. Adapted from a Broadway play, “Mister Roberts” follows a Navy cargo ship that has never seen action and a captain that thinks far too highly of himself, all while the titular character (played by Henry Fonda) tries to bridge the gap between the captain and the crew. It is equal parts funny and heartwarming, especially thanks to wonderful performances from Jack Lemmon and James Cagney.</p></p><p><h3>‘The Great Escape’ (1963)</h3></p><p><p>Probably the most easily accessible and entertaining depictions of war put to film, John Sturges’ “The Great Escape” has always brought a smile to my face. From its great performances to its thrilling pace to the memorable score, everything about this film excels at creating a full scope of World War II.</p></p><p><h3>‘The Battle of Algiers’ (1966)</h3></p><p><p>One of, if not the greatest, foreign war movies ever made. A joint production between Italian and French film studios, the film depicts a civil rebellion during the Algerian War in North Africa in the early 1960s. Shot on location during many of these rebellions, Gillo Pontecorvo’s gritty film plays out like a documentary that puts you right into the middle of an active warzone.</p></p><p><h3>‘Patton’ (1970)</h3></p><p><p>Franklin J. Schaffner’s biographical look at Gen. Patton’s life is driven by two things – its screenplay and George C. Scott’s performance. The screenplay benefits from showing the man as is, neither glorifying what he did nor denouncing him. The film wisely presents who Patton was without bias and lets the audience decide for themselves. Though that is bolstered by Scott’s mesmerizing performance and captivating speeches. Quite possibly the greatest performance in any war movie.</p></p><p><h3>‘Apocalypse Now’ (1979)</h3></p><p><p>For my money, this is not only the greatest war film ever made but is also in the top five greatest films ever made. Francis Ford Coppola’s depiction of the Vietnam War is both bold and personal, both subtle and epic and both grotesque and awe-inspiring. As Martin Sheen travels farther down the river and deeper into madness, the hellishness of war only becomes more overpowering, leading to one of the best villains in cinema with Marlon Brando’s Col. Kurtz at the end of the river. If you only ever watch one war movie, make sure it is “Apocalypse Now.”</p></p><p><h3>‘Ran’ (1985)</h3></p><p><p>War has existed longer than we’d like to admit and only gets more chaotic when it is between siblings. Akira Kurosawa’s war tragedy set in feudal Japan is loosely based on Shakespeare’s “King Lear.” An aging warlord tries to create peace before his death by sharing his kingdom amongst his three sons, only for them to follow in their father’s footsteps and seek war and power over peace and prosperity.</p></p><p><h3>‘Schindler’s List’ (1993)</h3></p><p><p>I was split on whether I should put “Saving Private Ryan” in this spot, but Steven Spielberg’s depiction of a man who finds his humanity during war speaks louder than any action sequences in his other movies. The hardship of war is finding the strength to make a difference, especially for those of us who don’t normally have that courage. “Schindler’s List” excels at lifting us up without completely tearing us down.</p></p><p><h3>‘Dunkirk’ (2017)</h3></p><p><p>Of all the recent war movies made, Christopher Nolan’s thrilling “less is more” approach to “Dunkirk” still holds up better than any CG-filled battle sequence. With only a few sparce words and a lot of truly stunning smaller moments, this epic fits right in with other great cinematic depictions of war and, in some cases, surpasses them.</p></p>