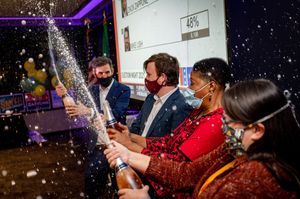 <p><p>A progressive-dominated Spokane Public Schools board will stay that way.</p></p><p><p>Continuing the trend of recent elections, Spokane voters gave strong support Tuesday night to liberals Melissa Bedford and Riley Smith.</p></p><p><p>Both said they intend to repay the favor.</p></p><p><p>“Spokane is growing and continues to grow and get more diverse,” said Bedford, a professor at Eastern Washington who campaigned on an equity platform. “I think it’s so important that our schools are welcoming and safe.”</p></p><p><p>Bedford took 57.4% of the vote at Position 3, easily beating conservative Daryl Geffken’s 41.9%. Bedford finished well ahead of the pack in the August primary and added to that advantage on Tuesday.</p></p><p><p>The race was closer at Position 4, but Spokane native Riley Smith outpolled Kata Dean by 53.9% to 45.3% to win a six-year term.</p></p><p><p>Speaking at a downtown gathering that also included Bedford, the 23-year-old Smith said he was ready to get to work.</p></p><p><p>“We launched this campaign in the spring with one goal in mind: expanding opportunity for all students,” Smith said.</p></p><p><p>“I can’t wait to get to work to expand mental health resources for students and staff, and elevate alternate career paths and apprenticeships so – not just A-students – have a path to success,” Smith said.</p></p><p><p><!–[photo id=749927]–></p></p><p><p>Following certification of the results, Smith and Bedford will be sworn in at the Dec. 1 board meeting.</p></p><p><p>Bedford will replace board President Jerrall Haynes, who chose not to seek a second six-year term. Smith will take over the seat held by appointee Aryn Ziehnert.</p></p><p><p>The election caps a record-breaking year for fundraising in the district, with the four candidates receiving a combined $114,000.</p></p><p><p>Dean led the way with $38,154, well ahead of Smith at $24,658. The other race was much closer, with Bedford raising $24,499 to $24,702 for Geffken.</p></p><p><p>Both races offered strong contrasts.</p></p><p><p>Bedford and Geffken took their messages to homes throughout Spokane, drawing different conclusions.</p></p><p><p>“I think the biggest thing that I’ve been hearing is that a teacher should totally be on the school board,” Bedford said.</p></p><p><p>“For all the other issues out there that people are talking about, like sex ed and critical race theory, the most important thing is how can we make sure we support our students during a pandemic,” Bedford said.</p></p><p><p>Geffken, a financial planner and former youth pastor, said he wanted to see more diversity of opinion on the board.</p></p><p><p>“The district needs someone who isn’t coming from a singular viewpoint,” Geffken said. “The district needs to hear a whole range of viewpoints, more than a single perspective – that’s the thing that keeps me campaigning.”</p></p><p><p>Geffken had cited concerns about critical race theory.</p></p><p><p>“It could be that they are not teaching the actual course,” Geffken said. But he said he wasn’t satisfied with a blanket denial “of just saying that it isn’t there.”</p></p><p><p>Bedford echoed statements by Spokane and other districts that critical race theory isn’t being taught at K-12 schools.</p></p><p><p>Differences were even more pronounced in the Position 4 race, especially on critical race theory.</p></p><p><p>Dean had been critical of the district on critical race theory, contending that it was being taught to her daughter at Ferris High School. In an online debate hosted by The Spokesman-Review, Dean said students should learn about the history of racism and bigotry, but she’s concerned about a more activist vision being taught.</p></p><p><p>Smith said it’s not an issue.</p></p><p><p>“This is a national issue that the far right has been pushing on local politics that doesn’t exist,” Smith said in the debate.</p></p><p><p>Referencing the district’s “T-2-4” slogan (technical, two-year and four-year college), Smith contends that the “T” isn’t robust enough.</p></p><p><p>“I want to see more technical programs in the high schools and middle schools,” said Smith, who also wants the district to work with labor unions to widen the range of apprenticeships.</p></p><p><p>Smith will be the fifth person to hold the Position 4 seat in the last six-plus years.</p></p><p><p>Paul Schneider won a six-year term in 2015, but resigned two years later.</p></p><p><p>Brian Newberry was appointed in September 2017 to hold the position until the next regularly scheduled board election, in 2019. Newberry declined to run for re-election and Kevin Morrison won the spot last November before resigning abruptly the following summer.</p></p>