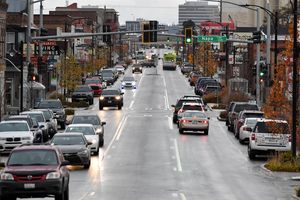 <p><p>It’s been a long and arduous road in the metaphorical sense, but less than 2 miles in reality.</p></p><p><p>East Sprague Avenue fully and finally reopened on Wednesday, capping an intensive infrastructure upgrade that began in 2017 and has intermittently closed down sections of the road nearly every year since.</p></p><p><p>The investment runs the stretch between Division Avenue and Stone Street.</p></p><p><p>The street is freshly paved, sidewalks are improved and crosswalks upgraded. Landscaping has been refreshed, transit stops updated and bike lanes added.</p></p><p><p>For businesses in the area, the end of the project is both a relief and an opportunity.</p></p><p><p>“Hallelujah,” said Jim Hanley, the co-owner of the Tin Roof and a longtime resident of the neighborhood.</p></p><p><p>The most recent section to receive a facelift was that between Grant Street and Division, with work wrapping up last week before the snow flies.</p></p><p><p>Altogether, the city of Spokane has poured more than $11 million into the targeted investment meant to help revitalize East Sprague Avenue and the surrounding neighborhood, East Central.</p></p><p><p>The project began in 2017 and continued in phases until 2020, when the COVID-19 pandemic threw a wrench into the city’s plans.</p></p><p><p>In 2020, the final phase of Sprague Avenue construction was entirely postponed, dragging it out for another summer and further exhausting already beleaguered businesses. Work picked up again in 2021.</p></p><p><p>“We don’t know how much (money) we didn’t make for those years, but it’s done at this point – it looks great,” Hanley said.</p></p><p><p>Just down the road, Joss Tribble and Rachel Nalley were regulars at Community Pint, a bar and beer-lover’s paradise. They decided to buy it and took over in July – right in the midst of construction and a stubborn pandemic.</p></p><p><p>There was “a lot of wait-and-see with our customers,” Nalley said, though it was not necessarily deliberate. Ownership of the neighborhood watering hole had changed, and now it was difficult to get to – walking through a construction zone at night isn’t exactly appealing.</p></p><p><p>Nalley and Tribble found creative ways to lure customers back in during construction, but it’s definitely a relief to move on.</p></p><p><p>“We have already seen a difference. Nothing crazy; we’re not night-and-day different, but we’re noticing an increase in the number of customers all day,” Nalley said.</p></p><p><p>With construction wrapped up, the street is incredible, Nalley added.</p></p><p><p>“It’s gorgeous and it’s definitely an area we’re proud to be a part of,” she said.</p></p><p><p>The future is bright for East Central and East Sprague Avenue, both of which suffered when Interstate 90 was built in the mid-20th century, ripping the neighborhood in half and diverting traffic away from what used to be a main thoroughfare.</p></p><p><p>Now, neighborhood leaders say the targeted effort is already having an impact.</p></p><p><p>“This is just the start of many great investments in a neighborhood that’s desperately been needing it. I think it’s going to return dividends in terms of jobs in this area as well,” said Randy McGlenn, chair of the East Central Neighborhood Council.</p></p><p><p>And as improvements continue, East Sprague’s reputation brightens.</p></p><p><p>“It has definitely changed the perception. It does not feel like the red light district here anymore,” McGlenn said.</p></p><p><p>If the hope is to lure in outside investment, it’s already working.</p></p><p><p>“There are a number of examples of outside investment people that have come in, bought property and fixed it up, and are now reaping the rewards of being in a community that is very pro-business, very pro-growth and working within a city network that promotes small business,” Hanley said.</p></p><p><p>The East Sprague Business Improvement District, which taxes local businesses and invests the revenue into neighborhood improvements, will also play a key role in shaping the future of the area.</p></p><p><p>The business improvement district has supplemented the city’s work on East Sprague with amenities like winter lights and hanging baskets intended to spruce up the streetscape.</p></p><p><p>The Spokane Transit Authority is also planning to bolster its amenities on Route 90, which runs along Sprague, including more shelters and more real-time information available for riders, according to Brandon Rapez-Betty, a spokesperson for STA.</p></p><p><p>McGlenn highlighted the neighborhoods’ efforts to build a plaza above the sewer tank behind Zip’s Drive-In, which he said is “going to be a huge step” for the neighborhood.</p></p>